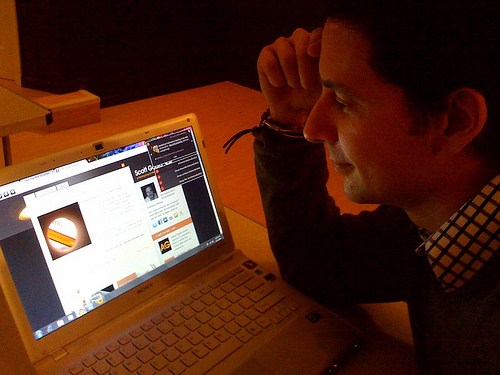 I think Seth Godin is reading my blog. Yesterday he wrote on ‘Losing Andrew Carnegie‘ and talked about investing in people over parts. Anyone who has been reading here a while knows I’ve been talking about this a lot since October, and gaining new levels of growth by getting free what I call ‘Factory thinking‘. The idea is that parts in a factory will break, but if you lead people, they can develop and grow.

Of course I know Seth isn’t reading my blog, nor is the idea mine to begin with – we’re just standing on the soliders of giants who’ve been discussing this since the beginning of time.

However it is an opportunity to discuss something that’s really on my mind right now and will require me to be painfully honest.

Are We Really Focussing On People In Social Media, Really?

So confession time. Claiming that Seth Godin is reading my blog is attention seeking. My blog is getting less comments and retweets and I find myself at times wondering what the point is. I’ve been doing things like writing blog titles like this, trying to promote my own stuff as if it’s someone else’s. All the dirty tricks.

But then I catch myself: this is factory thinking. It’s treating my blog is a machine that has outputs – rather than a place to serve and lead people.

What really shook me up was spending a bit of time with Chris Brogan at Like Minds. I don’t want to play the name game, but I was profoundly impacted by the time I spent with Chris. I’m pretty good with people and good with names – but Chris was on a whole other level.

I saw him meet people in the morning, meet a tonne of people during the day, and then call that person by name in the evening. Every person he spoke to I watched him converse with genuine interest, and never flip open his phone or excuse himself like I know I so often do.

When I asked Chris what his secret was, he gave me the simplest, yet most painful answer: “I just have an insane passion for humans”

Are We Broadcasting Social Media?

I wonder how many of us are broadcasting the message of discussion? The whole idea of Social Media is that it is two, three, four way communication, yet I know my behaviour of late has been one of broadcast.

One of my friends is Robin Dickinson. He and I talked a few months ago about a comment-driven blog, a place where the blogger was actually a facilitator – and rather than forcing his readers to read his content, he instead used the blog as a place to draw comments to form the content.

Well Robin went away and did it. What he has going on right now at RADSmarts is something I’ve never seen before – a community that is commenting on each others comments based on a short, 50 word blog ‘question’ with a picture.

I’ve got no point to round this up on, and to be honest I’ve lost the expectation of getting an discussion going below. But that doesn’t matter. This isn’t a machine that I’m churning – it’s a place to lead people. And if what I’ve seen last week with Like Minds is anything to go by, leading people will build far bigger things than managing machines ever will.

My thought now is, how much of what I thought was ‘discussion’ and ‘social’ was just broadcast?

Why Most Blogs Miss Out on the Greatest Value They Have

The Power of an Invitation