But the real headline here is this: that 3 months of prime time television marketing and audience engagement are beaten by Social Media.

Now, I’m going to try and say this all without too much waffle, but being such a landmark event, I’m going to make sure I fully unpack the case study, illustrate how things are changing, and also show off how my framework predicted this (hey, when you’re this right about something, you need to celebrate yourself, even if no one else will. It’s how you remain sane, right?)

I presented a framework a while ago that illustrates how spreadability is increased the more ‘dynamic, home-made, personal relationship’ and less ‘static, factory-made, public relations’ a message is. The thrust of my argument was that word of mouth has always been about spreadability rather than reach – and whilst reach can get the message before lots of people’s eyes, spreadability gets the message into the right people’s mouths and in turn into the right people’s ears. This is important, obviously, because in order for people to spread the message, it needs to be in their mouth, not before their eyes.

I’ll share the framework in a moment, but first lets look at the facts of the case study and the associated stats.

The X-Factor 2009 took 17 weeks of primetime 1.5 hour Saturday and Sunday night TV programming (as well as spinoffs, etc), with an average of 13.9 million viewers per show and an average 45.9% of the viewing audience (from Wikipedia). Every Monday the papers were full of either front or second page news from the drama surrounding the contestants and the judges fuelled from a rumour mill designed by the world’s best (bar-politicians) to keep media coverage and reach as high as possible. The peak audience was for the final show, totally 19 million viewers and 53.2% of the viewership. The maths are that an average 13.9 million people watched over 50 hours of The X-Factor.

So certain had the tradition become that the X-Factor winner would be the UK Christmas number 1, that bookmaker William Hill was planning to abandon its 30 year tradition of betting on the outcome. Until as you know, some guy (Jon Morter, to be exact, who had attempted a similar stunt the year before) decided to push Rage Against The Machine’s ‘Killing In The Name’ through Facebook to be top of the charts.

Jon and Tracy Morter created a Facebook group and started promoting, and then made a back-up group due to some glictches that the main group on Facebook seemed to experience. There were also a number of ‘fake’ Facebook pages and groups created that made it hard to distinguish which ones were created by Jon. These two ‘official’ groups contained the latest news, carefully instructing people to not buy the single until the week commencing Monday 14th December, as well as warning people that “bulk purchasing will disqualify that entire purchase you’ve made form the chart count”. The tipping point, according to the The Guardian,was:

…helped by the comedian Peter Serafinowicz, who on 15 December urged his 268,000-plus Twitter followers to join in, and it snowballed from there. By the time Paul McCartney and former X Factor winner Steve Brookstein had pledged their support, poor McElderry seemed doomed.

When I spoke to Jon on Twitter he said that it was actually UK celebrity Phil Jupitus who first tweeted about the campaign to his 50,000+ following when he retweeted a request from a follower.

Their numbers, in contrast to the X-Factor’s mainstream medium reach, were almost 1,000,000 members when combining their two groups – however this does not include the members of ‘unofficial’ groups and pages. The Twitter hashtag, #ratm4xmas, was a trending topic for a large part of the week – however the TweetReach stats are very low: just over 12,000 (#likeminds had over 200,000.) What’s also certain is that none of these people spent an hour, let alone 50 hours, on consuming the contents of the Facebook group of page.

The numbers come down to this:

That fact that a Social Media induced campaign, that admittedly did get attention in the press in the sales week, beat the weight of an average 13.9 million people consuming 50 hours of ‘message’ over 17 weeks, is not only a case study, but the case study to illustrate the power of Social Media. I really am astounded that people aren’t making more of a song and dance about it because this is huge.

Luckily, here I am to make a song and a dance.

I’ve been writing about this for most of the last 6 months (a collection of links here), but a lot people kicked back against what I was saying. Now, we have the case study. I wrote, also a while ago, that personal relationship is the new prerogative over public relations, and that Social Business heralds the shift from managing people like machine parts in a factory process to developing people and accessing the potential they have to learn and grow. In quite a poetic sense, this really is rage against the machine.

Down to my Framework

So, it’s about time we got to my framework and just a lil bit of bragging. I put this together in September this year to illustrate how spreadability is increasingly more important than reach, as I said above (“whilst reach can get the message before people’s eyes, spreadability gets the message into people’s mouths”, remember?) 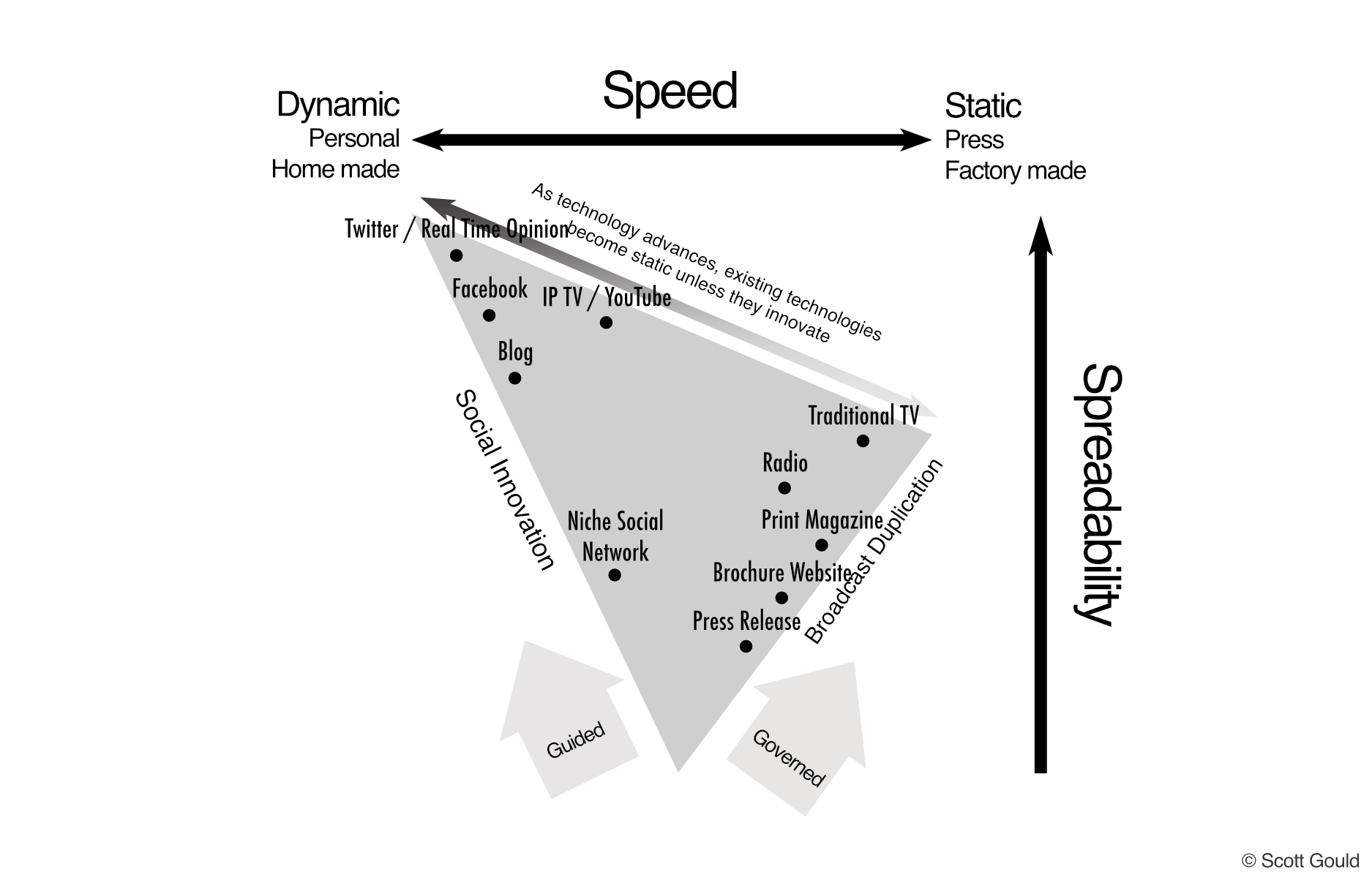 Why this guidance, dynamic, homemade, personal relationship talk matters is because it allows the message to take on multiple forms and therefore becomes more personal and more relevant to more people. Quite litterally, people can make it their own. Another word for this is ‘translating’ – the understanding that you need people who can take your message and translate into the right motivational language for the hive that they influence. It’s like taking your message that’s 2D and then making a a multi-faceted diamond, each different facet communicating the same message in a slightly different way to meet the needs of a slightly different audience.

When you look at the X-Factor campaign, it has governance all over it. Professional at the highest level, every bit of hype, buzz, drama and emotion is factory-made and manipulated to push the audience towards financial commitments (just how the audience can take multiple sob stories of how “this is my whole life” every week just baffles the mind.) It’s also worth pointing out that the X-Factor is incredible expertiential and itself a very good example of the personalisation and Glocalisation that is happening in marketing.

Meanwhile the Rage campaign is not at all professional, but it is personal. Then didn’t create a Facebook vanity-url, have any kind of branding or copywriting expertise, or even run some kind of strategy from a centralised website full of share buttons. But when you look at their Facebook group you see community. You see people uploading the videos that motivate themselves, and in turn motivate others. You see people pitching in ideas, feeding back on sales and numbers, and warning each other not to buy bulk copies of the single. Other than a small note on both presences saying “Jon and Tracy”, you’d never know who was running the thing – the whole message belongs to the community – compared to the X-Factor, which has 13.9 million average viewers, none of which are under any impression that the X-Factor could ever belong to anyone else other than Cowell.

I’d like to be able to pull apart for you the exact components of how the Rage campaign won, but the mechanics are pretty simple:

In the end, Simon Cowell purportedly offered jobs to Jon and Tracy, but Jon says that haven’t received any offer (as far as they know), but have spoken to Simon on the phone. What if Simon Cowell has offered them the job? Wise move? What do you think? Do you think this kind of thing can be reproduced by corporates? Or does big business lack the authenticity and personal relationship to pull off not only viral campaigns but movements like this?

What lessons can be learnt here?

Let me hear you comments below.

Uncompromising on Your Experience