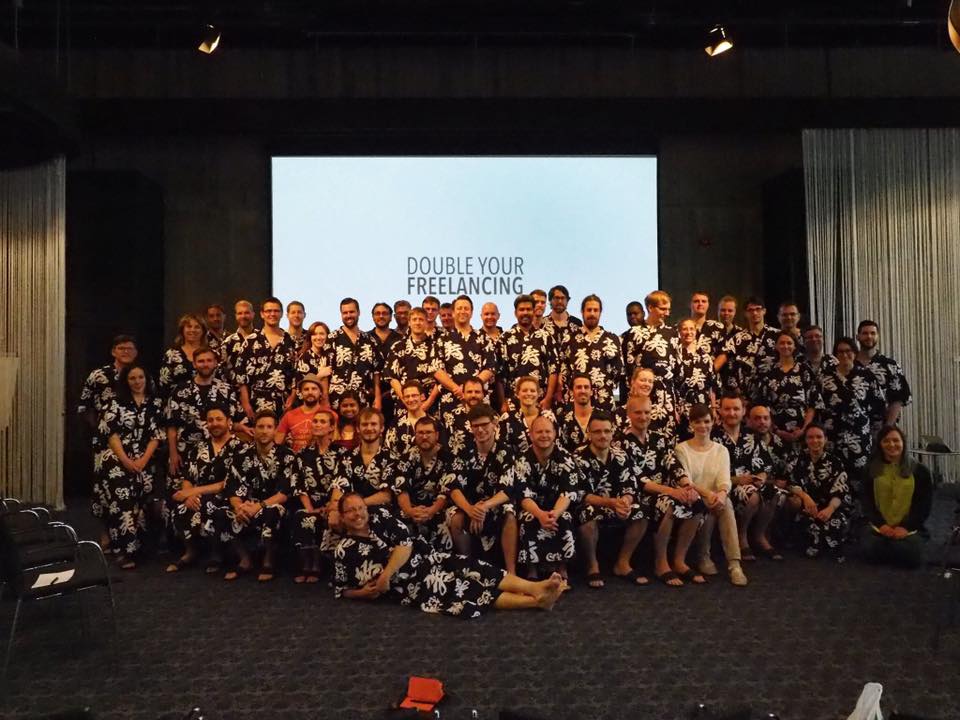 Last night I came upon the phrase ‘small and social’ while reflecting on Brennan Dunn’s DYFConf in Europe.

Brennan ran a very different type of conference, which as you would expect, was an immersive, engaging experience and therefore very transformational.

Yet, this happened in some part by accident, because initially he wanted 100 people to be at the conference. It became clear to him as he was marketing the event and fewer bookings were coming in than he expected that he would have to adjust his expectations to a smaller group… and yet… this worked to his advantage.

In his own words:

Lesson 3: Keep it small
Like I mentioned earlier, I didn’t sell nearly the amount of tickets I was expecting to sell.

And for a conference organizer with fixed expenses, that’s not a good thing.

But next year will be the size of this year’s conference — because it was the perfect amount of people.

We didn’t have a speaker room. Nor did we even have a speaker dinner this time around. The speakers were really just attendees who happened to be up on stage, sharing something that they’re deeply familiar with. (This also came from Amy Hoy and Alex Hillman’s BaconBiz.)

I have a bad penchant for hanging out in my room during certain talks, or at least grouping with a few others in the hallway throughout the event.

This didn’t happen at DYFConf.

So why was it that the event was better smaller? What is it about small and social that makes for richer engagement? I’m so glad you asked!

Let’s start by clarifying that people go to events primarily for two things: learning and networking. (Thank you to Roger Haskett for telling me that.) So it would be in the best interests of event organisers and the like to create spaces where people can do those two things in the best way.

If you think back to school, the way that this was done by classrooms of around 30 people in size. In business, workshops are normally best with around 20 people in attendance. Famously, Jesus had 12 disciples that he trained. The unit that the military works in practically on the ground is in squads of 8 to 12.

Yet, though they be small, they are of such a size that people can actually learn and network.

This in stark contrast to…

Any event organiser has one objective: sell tickets. Almost every church leader I know wants a bigger church. Speakers want to talk to large audiences. And now with TED, we have attached the apotheosis of speaking to being in front of a large crowd.

What drives this is the sense of wanting to matter, to feel like you’re where the people are, to experience the emotion of when hundreds or thousands come together. Now, there’s nothing wrong with that – indeed it’s beautiful – but, if we want people to learn or to network, it is not effective.

In Brennan’s example, the need is to sell lots of tickets to make the price work (and to make it cheaper for people to attend). And as is almost always the case when running events, the way you get lots of people to come is to have big name speakers and use social proof by showing that everyone else is coming.

And again, I don’t have a problem with this, but… if we want people to learn or network, it’s not effective!

The reason why big and broadcast doesn’t work for learning is because as I like to say, if you’re not talking, you’re not learning.

The Marriage of Small and Social and Big and Broadcast

What is to be done, then? Are we have no more big events?

I don’t think so. I think we can still have big. The way I see it, we have two options:

How can we have pockets of small and social? Quite easily! In a conference setting these would typically be called ‘breakout sessions’ or workshops. But don’t do what is now common practice and make them on a separate day to the plenary sessions, as if they are a lower grade of content! Make each day a mix of learning styles: some big and broadcast talks, followed by some small and social workshops, followed by some more big and broadcast talks.

Even a talk in front of thousands can create small and social pockets inside it. As a speaker you could have a moment where people turn to the person next to them and discuss a point you’ve made. Yes, it might break up your flow – but if you really want people to learn or to network, this is far better for them!

The most masterful communicators have the ability to do a big and broadcast talk, yet it is full of small and social moments. This is done by invoking the hearer’s imagination so that they literally see themselves as the object of your talk.

The point is that small and social wins the day on what people actually want from events, and it doesn’t mean you have to ditch being big and broadcast.

Thank you to Brennan Dunn for the example. Also, the photo at the top of this article is from DYFConf. If you are a freelancer of any kind, his website is the number one resource for increasing your sales: doubleyourfreelancing.com

Thank you to Jeff Hurt from whom I first learned of Edgar Dale. His blog (along with Dave Lutz) is my favourite for meeting design: velvetchainsaw.com

And thank you to Roger Haskett for teaching me that people go to events to network and to learn. More from Roger and his incredible work here: engagementunlimited.ca

What Engages One May Well DISengage Another

Handing Off vs Signing Off

The Value of a Value Approach

Thinking Outside of the Bin