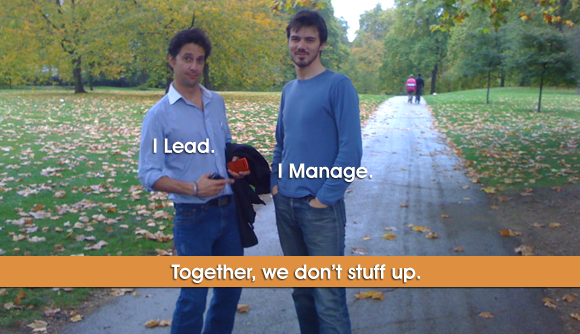 I’ve been thinking and writing for a little while now about the underlying concepts of Social Media – stuff that I keep on insisting to people are the ‘bigger concepts’ that are regardless of tools, much of which enters the realm of cultural and economic commentary. I started examining the change from an industrial economy to a knowledge economy – essentially discussing the fact that the majority of businesses in Western World now deal mostly with intangibles that are knowledge-based as opposed to production-based. For me, this was ‘The Reason Why Most Companies Don’t Get It‘, because it requires these companies to cease managing people like parts in a production process, and adjust to leading and developing the knowledge skills of their staff in this knowledge economy.

Take, for instance, Company X, who deliver computer services. Their competitive advantage, and primary economy offering, is not in the parts that they provide – for they are easily accessible in today’s climate, and had to compete on price with given the commodoitisation of computers. The competitive advantage and primary offering is actually their knowledge of both hardware and software, and ability to deliver that knowledge as an effective service. This is knowledge-work, not production or industrial work, and is how Company X competes against Competitor Y that offers the same parts, but lesser quality service.

But what happens with Competitor Y ups their game? Is the solution for Company X to better its management of parts, or rather develop its people? In a knowledge economy, it’s the latter – and by fulfilling the latter, the staff are empowered to better manage the parts and processes.

Thus, as I concluded in this post on companies not ‘getting it’, I came down to the distinction between management and leadership – a distinction that academics, consultants and experts around the world have been making for some time.

Leadership and Management, in Social Media

I was reading an excellent post on the same subject by Benjamin Ellis at the SocialOptic Blog. He communicates similar thoughts to mine, namely that he is “increasingly convinced that you manage things, but lead people.” He then continues,

Differentiation in today’s market place rests in having great people, and building an environment that lets them operate at their highest level. In my early working life, in retail, the businesses were driven by process, but all of the businesses I have worked in over the last few decades have been driven by skills and knowledge. It’s a big shift in the way that a business is built, and in the kind of systems that are required.

This is what I’ve illustrated above in the case of Company X. Benjamin’s focus in this post is more on how you lead a team of very bright people who do not need to managed in the tradition sense (something that ties in beautifully with ‘people-to-people‘), whilst I want to take this thought and consider its implications for the bigger concepts of Social Media.

As an emergent industry, whose rules are being written as we are innovating and executing, it requires very able leadership. All of the things that a ‘Social Media innovator’ should be strong at to survive are intangible and locked into people:

Reading this list (it’s very incomplete – please add your further points), I immediately recognise two groups of people, the first being people who are already doing this. Some are famous bloggers, some are not well known but are actively doing this day in, day out, and navigating the red tape with big brands and local companies as they do it. The second group of people I see are those who purport to understand Social Media and offer it as a service, but lack these leadership abilities.

So then, I’m pretty convinced that successful Social Media must be lead and developed first, by a leader.

Then, we must have a manager, who can occupy the ground that the leader breaks, and take their innovations and turn them into manageable and repeatable processes. When I think about this, I’m thinking about tangible processes and parts:

It’s a game of two halves

We must have leadership and management.

A lack of leadership creates Social Media ghost towns – Facebook pages with no activity or purpose, campaigns that overestimate target audience participation, budgets of millions that get little return, failed rebrand after rebrand. Most of these lack one of the most needed traits of leadership – creativity. I cringe every time I see an agency offer Social Media as a service, promising to setup Facebook and Twitter as their ‘strategy’ – it lacks any kind of the creativity that is so desperately needs to have any kind of success beyond getting the office to all friend the Facebook account.

A lack of management creates Social Media train wrecks. Eurostar, anybody? (One of these days I’ll do a fuller post of ‘Ghost Towns and TrainWrecks’ with plenty of examples.)

Olivier Blanchard in his post on Best Practices for Social Media Programs, outlines the 4 essential stages of a Social Media program:

At Aaron+Gould we now use these 4 as standard in all our consultation and Social Media program development for our clients, so I’ve gotten to know these stages well. I’d say that Stage 1 requires the most leadership. Stage 2, integration, varies in the leadership needed depending on the size of the organisation. Stages 3 and 4 are management.

So the amount of leadership necessary is smaller than the management – however I assert that a strong concentration of leadership and a lot of focus is required during stage 1, such that it outweighs the concentration required in the managing of the other stages (because, thats the point of a good managed process, that it can run easily.)

Every Social Media program is like a new startup in the beginning because of the new mental space it requires and its innovative nature – hence the high degree of initial leadership. This leadership, then, also requires the internal skills of team building, vision casting, motivating and goal setting.

What I’m left with is the feeling that, when we understand the concepts of Social Media, we cannot view it as another bolt-on that an agency can offer to a company if there is to be any kind of longevity to it. We need to talk framework, models, vision, objectives, purposes – the talk of leaders – before we get into the talk of managers.

These are just some points to get the conversation started. What do you think? Is this on target, or just saying stuff that’s already been said?

Under Promise, Over Deliver

100 Blog Posts On, My Number One Lesson