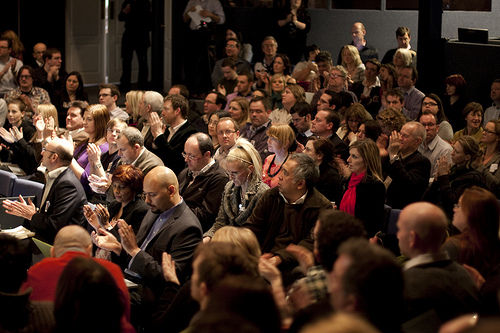 I’m really enjoying Dan Blank’s blog at the moment. I first caught onto him through my close friend Andrew Davies at idio, and I’ve been following him for a while, but it seems these past few weeks I’ve really caught onto his writing a lot more.

Last week he wrote a post that I knew I’d love the moment I saw the title: “You Don’t Sell To A Community. You Support A Community“. You guys know I love a good strap line, especially when there’s aliteration. The great thing was that the post delivered.

It’s hard to pick a central quote (you can guess what the post was about), as it was one of those almost poetic pieces where each paragraph builds incrementally on the previous one, but perhaps the best part to me is this very accurate description of the latest marketing fad which is “build community”:

A brand should be careful about approaching social media as a sales funnel: to establish connections, build ‘trust,’ encourage a ‘community,’ and then market products and services to them. That’s not a community strategy, that is a marketing plan. And there is a difference.

Turning it around is hard – we’re still in the process of doing it – and I’m learning some key lessons as I go.

Dan goes on to say that “building a community” for business is furthermore a hard and an expensive thing to do. It seems a stock answer at the moment to tell publishers in particular that they should “build community”, but I watch the people who say it and often they have never built one themselves. Dan actually argues that you don’t build them anyway – they already exist, and you help it grow.

My Experience with Community

I’ve nurtured many a community in the last 13 years that I’ve been ‘doing this’, but I think my most pertinent example would come from Like Minds.

I’ve said many times that my original intention for Like Minds was to show the local businesses that I was good at marketing, so that they’d hire me as a consultant. I was desperate to be accepted (many of the people who support me now didn’t back then), and I thought that if I could pull off a good event, they’d see.

After the success of the first Like Minds in October 09, a community – a tribe – was born in a day, but I still in mind saw that as a means to an end for getting work. Sure, I supported the community, but I didn’t see it as being a place that would be my main focus and income. I wasn’t selling to them – it’s important to clarify that – but I did see them as a way for me to secure more consulting.

It wasn’t until April this year that I realised how dearly I loved the community that was growing, and that if I focussed on serving that community, that would be far more fulfilling and rewarding. The irony is since I made that decision to not pursue consulting, consulting work has started to come in, and I turn a lot of it down in order to focus more fully on Like Minds because that’s where I’m seeing people really effected, which has always been my aim in the beginning anyway.

When a community really clicks (which I’ve been a part of many times), you know there’s no way that you can sell to them anyway. The things that they need from you, they’ll get without you blowing your horn, and you won’t given them anything but the things they need anyway, even if it’s not your thing that they need.

Your Experience with Community

Give Yourself to the Season

Keeping You in the Loop

Keeping Your Head When Everyone else Is…

My Like Minds Slides on Spreadability at WOM UK